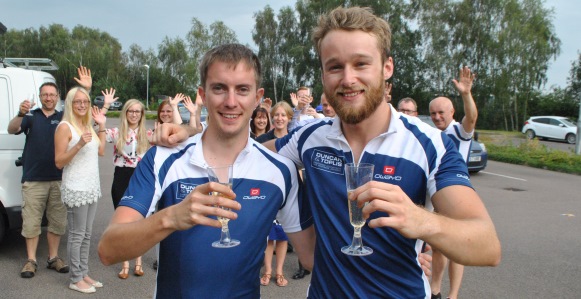 We love getting behind charities, so I really enjoyed spending a couple of days on the road last week providing media support for two employees from our client Duncan & Toplis who cycled over 200 miles for a good cause.

Oli Phillips and Sam Mosedale thought it would be a good idea to visit all ten of their firm’s offices over two days by cycling round Lincolnshire and beyond. Starting at the Lincoln office on Thursday morning, they cycled to Louth, Skegness, Boston, Spalding and Stamford on day one and to Melton Mowbray, Grantham, Sleaford, Newark and back to Lincoln on day two.

Along the way they were supported by 13 colleagues who dipped in and out of the ride, cycling one or two legs alongside Oli and Sam. They were also joined by Mark Smith from Skegness whose teenage son Ryan suffered a serious head injury last year when he was involved in an accident while not wearing a cycle helmet.

Mark and his family set up the Ryan Smith Foundation to raise awareness of cycle safety, and it was their charity that Oli and Sam were supporting on their ride. Around 230 miles later the pair had raised almost £3,000 for the cause.

Shooting Star was one of the sponsors of the event (we provided the champagne to toast Oli and Sam at the finish), but more importantly we worked hard to keep Riding for Ryan in the public eye. As well as blanket coverage in local newspapers and websites we managed to get two live interviews on BBC Radio Lincolnshire and an article on the Daily Mail website – the world’s most popular news site.

To find out more or to make a donation visit the Duncan & Toplis D&T Riding for Ryan page online. JA