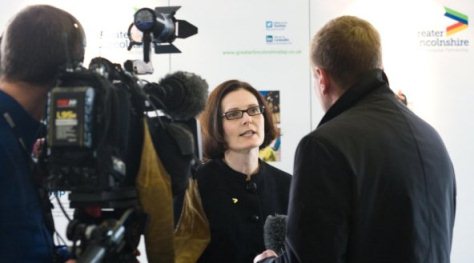 For the past few weeks we’ve been hard at work preparing for the Greater Lincolnshire Local Enterprise Partnership’s first annual business summit at Market Rasen Racecourse.

It was quite an undertaking: locating a venue, identifying a guest list, sending out invitations, preparing branded visuals with Optima Design, inviting the media, putting together the agenda and organising key speakers.

On the day we looked after the many journalists who attended and battled with a poor Internet connection to broadcast the highlights of the event via social media.

Around 100 business leaders came to the

half-day the event, and we were delighted that the local and regional media bought into it too: BBC Look North Business Correspondent Paul Murphy attended with a cameraman, as did Rod Whiting from BBC Radio Lincolnshire, Ed Grover and Anna Draper from the Lincolnshire Echo, Simon Faulkner from the Grimsby Telegraph, Daniel Ionescu from The Lincolnite and Mike Shields from Business Link magazine.

That evening we were pleased to see the summit making headline news as the top story in Look North’s bulletin, and there’s been a lot of positive coverage elsewhere.

The idea is for all businesses in Greater Lincolnshire to feed back on the three-year business plan which was launched at the event by LEP Chair Ursula Lidbetter. If you haven’t seen it you can read it here, and to pass on your comments you can send an email to GLLEPSecretariat@lincolnshire.gov.uk.